Regular HotHardware readers and general hardware enthusiasts probably already know this, but SiSoftware is the creator and maintainer of the SANDRA utility for Windows PCs. Originally created as a tool to simply capture and display system information (as Windows’ own capabilities in that regard were quite primitive when SANDRA was new), SANDRA is now primarily used as a benchmark suite.

Usually, tests performed using SANDRA get uploaded to SiSoftware’s database where folks can peruse the results and compare them against other tests. What this ultimately means is that the developer has access to a tremendous database of benchmark results for hardware old and new. Sometimes, those results include tests performed on pre-release hardware, as you’ve no doubt seen reported many times on this very website.

Well, SiSoft put up an article this morning doing some analysis of the specifications and performance of pre-release Intel Raptor Lake CPUs, specifically the model most likely to end up being called “Core i9-13900.” This chip is the flagship “non-K” model of the Raptor Lake family, having the full core configuration, but running at a much more conservative power limit than the unlocked “K” series CPUs.

Most of the leaked specifications match the specs we’ve seen in prior leaks. The preliminary CPUs have eight Raptor Cove P-cores with 2MB of L2 cache, as well as four clusters of “Gracemont” E-cores that share 4MB of L2 cache per cluster. That’s a significant upgrade in L2 cache (230%) compared to Alder Lake.

SiSoftware marks down a peak clock rate of 3.7 GHz for the P-cores on the purported Core i9-13900, while the E-cores top out at 2.76 GHz. The former is likely down to these being pre-release processors, but the latter lower-clocked E-cores might be intended to improve the little cores’ efficiency.

As we mentioned, SANDRA is largely used for benchmarking these days. When testing CPUs, it performs a series of tightly-optimized arithmetic operations and gauges their performance at these tasks. While synthetic benchmarks like these aren’t necessarily indicative of real-world performance, they still give us an interesting peek into the potential capabilities of these processors. 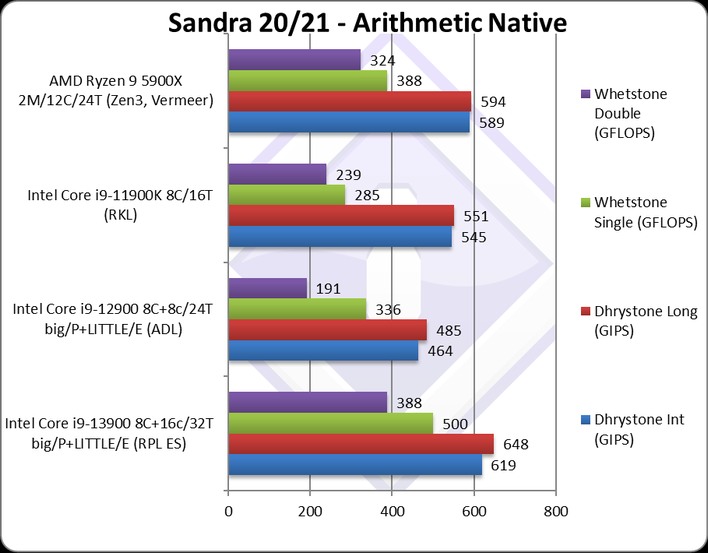 The “Arithmetic Native” chart here measures integer and floating point math performance with specific data types. These test don’t make use of SIMD, so there’s no SSE or AVX magic going on here; these are as basic as it gets. You might be surprised to learn that a lot of applications still use these kinds of instructions, so this performance isn’t irrelevant at all.

Notably, these tests are extremely multi-threaded, and that’s why we see the Ryzen 9 5900X and its 12 big cores competing with the faster-on-a-single-thread Intel chips. The Core i9-11900K also gets to flex its high-TDP muscle, but none of the challengers can stand up to Raptor Lake. Even with what is presumably reduced clock rates due to being an early sample, the unreleased CPU dominates in every category, beating the 65W Core i9-12900 by double in the Whetstone double-precision test. 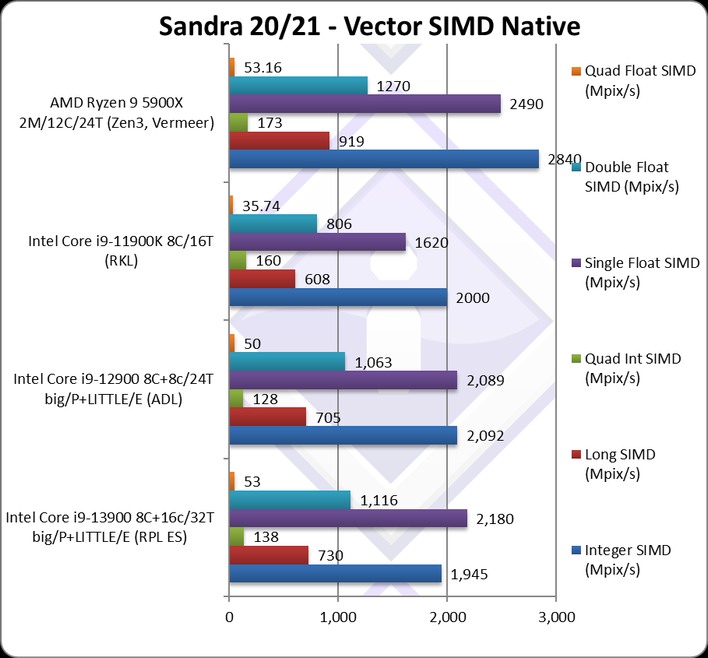 This chart is fundamentally the same test, but using each chip’s fastest SIMD instructions. That means AVX2 on everything except for the Core i9-11900K, which can take advantage of unlocked AVX-512 support to allow it to hang with the twelve-, sixteen-, and 24-core chips in the comparison.

Unsurprisingly, AMD’s chip wins most of the benchmarks here with its twelve full-power cores. RPL generally beats Alder Lake by a handful of percentage points, although it loses to the 12th-gen chip in INT32, and both 13th and 12th-gen parts fall behind Rocket Lake in INT32 and INT128 testing. Of course, the fact that RPL is generally winning against previous-generation parts despite a significant clock rate advantage bodes well for the performance of final silicon.

SiSoftware has since taken down the article. You can still find it over here on the WayBack Machine for now, though.

Intel to Drop Celeron and Pentium Branding From Laptop Parts

How to Use Nohup to Run Linux Scripts Unattended